I have just released version 2 (which is rather like a version 0.8 if this were a commercial product) of an app for Android that synchronizes with a Lotus Notes discussion database.

Here is a screen dump: 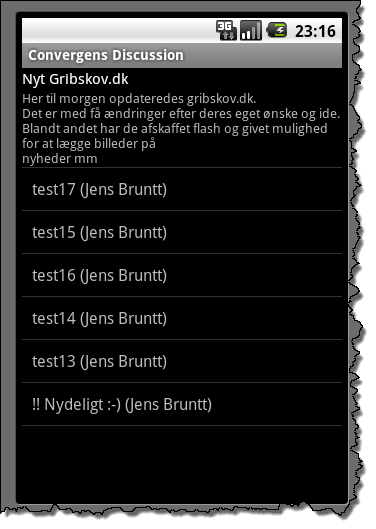 I blogged about it on the company blog at work - App på Android til sync med diskussionsdatabase - In danish, but you can read it in Pidgin English by following this link: App in Android to sync with discussion database.

I think that it is pretty cool. I guess it has taken me about 40 hours to code.

Gravatar Image2 - Ben and jesper. Thanks for the comments.
Right now the app is not suitable for any kind of distribition outside our office.
It requires an extra agent and a script lib to be added to the discussiondatabase.
I will think about how i could make it available in a form suitable for use outside convergens.
I have a feeling that there are LOTS of lotus notes databases out there... So there should be a potential user base....
Skrevet af / Written by jens bruntt fra 15:53:39 På 03-11-2011 | - Hjemmeside - |